Once Upon a Time … in Hollywood

A What If, Fairy Tale 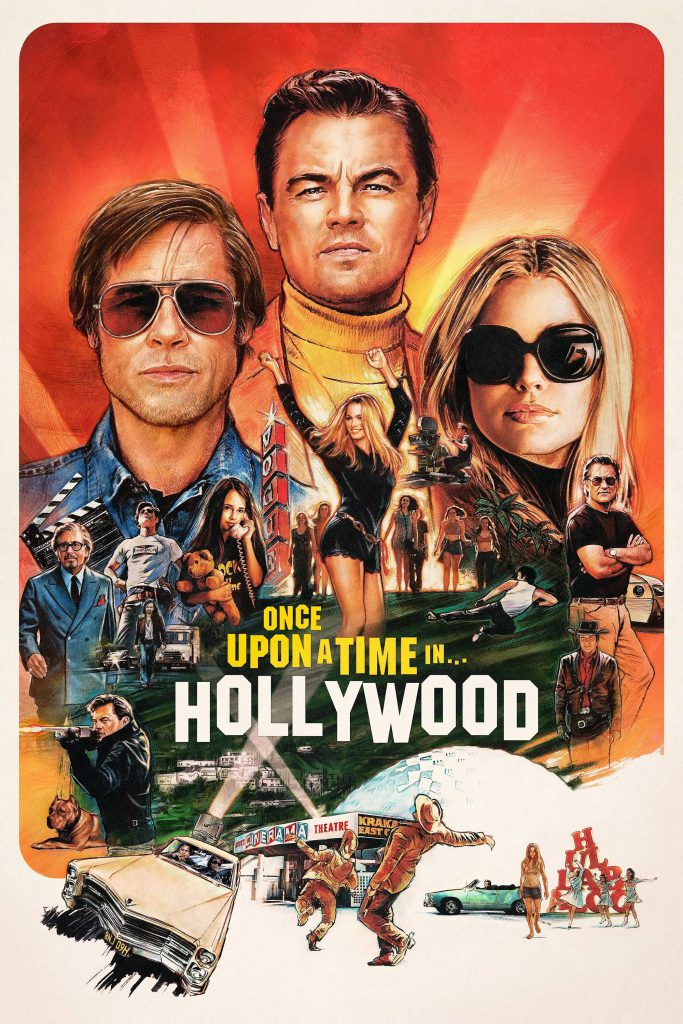 ONCE UPON A TIME … IN HOLLYWOOD

Once Upon a Time … in Hollywood is a fairy tale. More precisely, the movie is a “what if, fairy tale.” It makes you wonder how the world would differ if the movie’s ending was true.

Rick Dalton (Leonardo DiCaprio) just wrapped up his 1950’s Western cowboy TV show and is living his life in Hollywood.  He lives next door to Sharon Tate (Margot Robbie) and Roman Polanski (Rafal Zawierucha).  The neighbors are only significant at the end of the movie.

That’s it, just three months in the life of two 1950’s era guys living in the ’60s with the “dirty hippies” that have moved into the city. 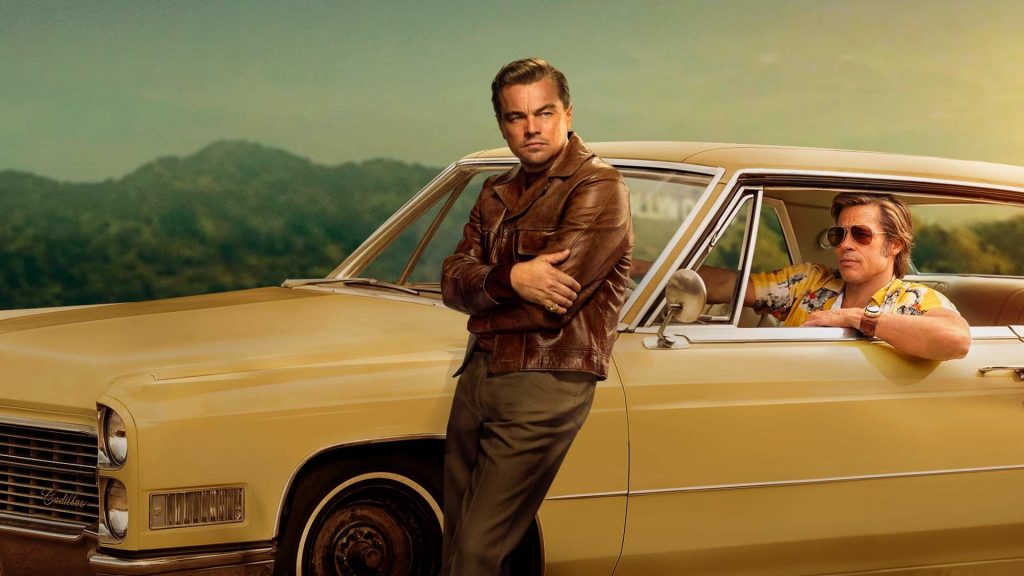 Once Upon a Time … in Hollywood does an excellent job with character development.  Before there is a scene with someone, there is usually an introductory scene to let you understand the character.  Before Cliff gives one of the dirty hippies “Pussycat” (Margaret Qualley) a ride, you see her and her friends several times; hitchhiking, hanging out, and dumpster diving.  You develop an impression of Pussycat before she enters the scene with Cliff.

Rick’s scenes also have character development. Rick does an adorable scene with 8-year old Trudi Fraser (Julia Butters) before they do a more important scene.  Knowing Trudi makes what she tells Rick in the second scene, all the more significant.

Between Leonardo DiCaprio and Brad Pitt, there is much discussion about who should get the nomination for Best Actor; I vote for Leonardo as Rick Dalton.  Rick Dalton, in the movie, has a much different personality than the real Leonardo.  The Rick Dalton character appears to be a difficult character to play with his slight stutter or hesitation before he begins to speak.  He is playing a fading star and Leonardo does a perfect job relaying the lack of self-confidence.  There are some great scenes.

Brad Pitt’s character, Cliff Booth, is Brad Pitt playing Brad Pitt.  The level of difficulty is low.  His most significant scene is taking off his shirt to prove he is still the Brad Pitt you know from 20+ years ago.

Margot Robbie as Sharon Tate gives a solid performance as usual.  But this is not a movie about Sharon Tate, so there are several scenes of Margot walking in ’60s hot white boots and some dancing. She does not get boring, but she doesn’t need to stretch very far. Does she even need to be in the movie?

Quentin Tarantino wrote and directed Once Upon a Time … in Hollywood. As with almost all Tarantino movies, there is violence and blood.  This movie waits until the end and gives you a perfectly choreographed, bloody and surprisingly cathartic scene.  With great character development, you know enough about the characters to have an opinion.  The opinion I developed allowed me to have a bloody cathartic experience; it was great.

I enjoyed this movie.  It moved along at a good pace, had an interesting story with a lot of actors, and there was a lot going on. Once Upon a Time … in Hollywood is based upon real events so there are references to several well-known people such as Sharon Tate, Roman Polanski, Sam Wanamaker, Steve McQueen, Bruce Lee, Squeaky (Fromme), Mama Cass, Michelle Phillips, and probably more I did not recognize.

The boys get back after three months in Italy, where Rick Dalton made some Italy Westerns and Cliff Booth took care of him.  On the first night back, three from the Manson family (although in the movie they live on Spahn Ranch, owned by Bruce Dern’s character George Spahn) set out to kill everyone living in the house where Sharon Tate is living.  The three Spahn Ranch people park in the street and a drunken Rick Dalton comes out and yells at them and they leave (another good scene).  They “brainstorm” in the car and then decide to kill everyone in Rick Dalton’s house instead of Sharon Tate’s house.

They come back and break into Rick Dalton’s house.  Rick is floating in the pool and doesn’t hear them.  Cliff is tripping on an acid-infused joint and the new Italian wife is sleeping in the bedroom.

They threaten Cliff; Cliff has his dog, Brandy, attack the guy with the gun, Tex. Then the dog attacks the pale-faced girl, Sadie, who has a knife.  Cliff kills Tex.  Sadie, screaming, stumbles outside into the pool.  This disturbs Rick who removes the headphones, gets his flame-thrower and incinerates Sadie.

Meanwhile the other girl, Katie, stabs Cliff in the hip and Cliff repeatedly slams her head into things until she is gone.  Are you getting that cathartic feeling?  After Cliff is taken to the hospital, Rick wanders outside and the people from Sharon Tate’s house asked what happened. Rick starts talking to them and they all go to Sharon Tate’s house and meet Sharon. What if …! 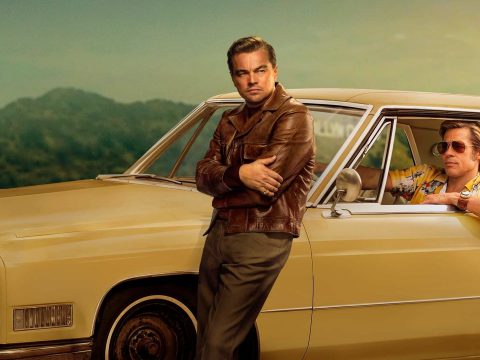 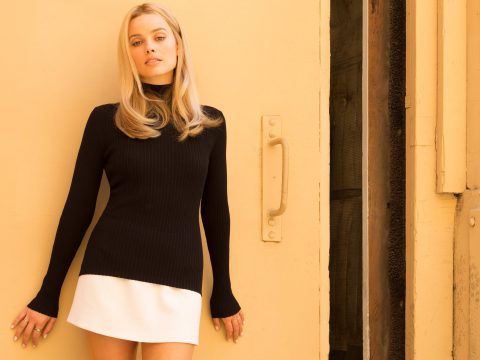 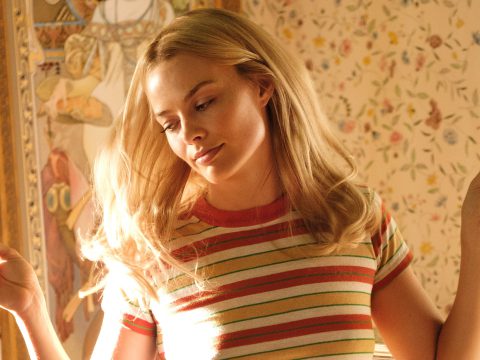 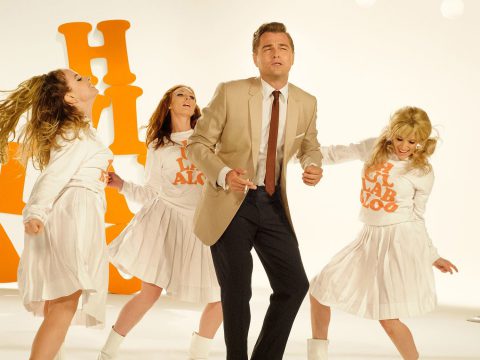 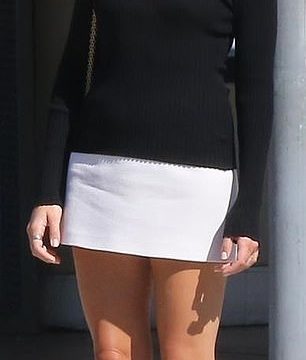 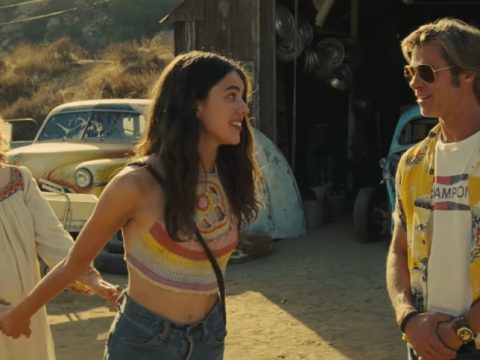